APJ abdul kalam biography pdf in english: APJ Abdul Kalam was like the most precious diamond for our nation. Avul Pakir Jainulabdeen Abdul Kalam was born on 15 October 1931 in a Tamil Muslim family. His father, Jainulabdeen, was a boat owner and an IMAM in a mosque; he used to carry Hindu pilgrims back and forth between Rameshwaram and Dhanushkodi. His mother’s name was Ashiamma, a housewife. 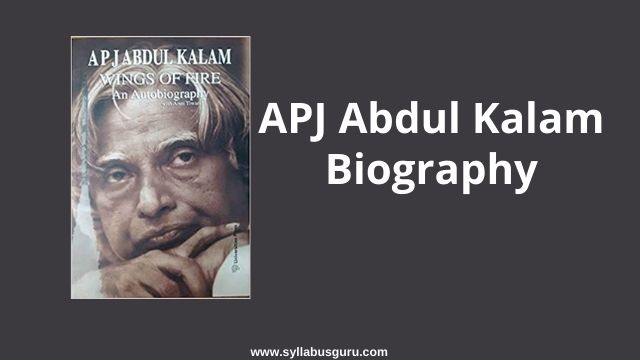 In his family there were his parents, five brothers and sisters in which Abdul Kalam was the youngest of four brothers. His ancestors had been wealthy and had lots of properties; after some years of Kalam’s childhood, Kalam fell in a miserable condition. At a very early age, he started selling newspapers to contribute monetarily to feeding his family.

Apart from that, in the days of his schooling he was an average student but he was talented and curious about studies. His favorite subject was Mathematics and used to spend hours on this subject. After completing intermediate from Schwartz Higher Secondary School, Ramanathapuram he moved to Saint Joseph’s College, Tiruchirappalli, (affiliated to University Of Madras) for his graduation ,from where he graduated in Physics in 1954.

He moved to Madras in 1955 to study aerospace engineering at Madras Institute of Technology.

It was his engineering time, he got engaged in a high level project, but he was slow to finish the project before the deadline. The Dean of the project warned Kalam that he will not be getting scholarships if Kalam won’t finish the project on time. Kalam finished his project at an extreme point but got rejected because Kalam secured 9th place but there were only 8 places for the Aerospace mission.

Initially he started his job at DRDO by designing small hovercraft but was unsatisfied with his job. In 1969, he was transferred to Indian Space Research Organization (ISRO) where he was assigned to the post of Project Director of India’s first Satellite Launch Vehicle (SLV-III)  which successfully deployed the Rohini Satellite near to Earth’s orbit. Along with this Kalam was also working on the Expandable Rocket Project alone at DRDO in 1965. In 1969, Kalam received government approval which led to the expansion of the project.

Kalam also directed two projects named Project Devil and Project Valiant which were introduced to develop ballistic missiles from the technology of SLV.  Government was already in favor of Kalam’s idea, hence the government provided required funds to the ongoing project under secrecy.

He gave his valuable contribution to the ballistic missiles that’s why Kalam is also known as the “Missile Man of India”.

Kalam was Chief Scientific Advisor to the Prime Minister and Secretary of DRDO from mid 1992 to 1999.

Kalam also served as 11th President Of India succeeding Narayan. He won the election for President with 9lakh+ votes, leaving behind Lakshmi Sahgal with the votes of 1,07,336. Kalam won with a great margin of votes. At that time, the NDA(National Democratic Alliance) was the ruling party that chose to appoint the post of president to Kalam.

Kalam wrote many books which are still popular for millions of people. Some of the famous books written by him are:-

On 27 July Kalam went to Indian Institute of Management Shillong to deliver a Speech, while returning he experienced some uneasiness, even after checkup and treatment he died.

It was a very sad moment for the nation when everyone came to know about his death.