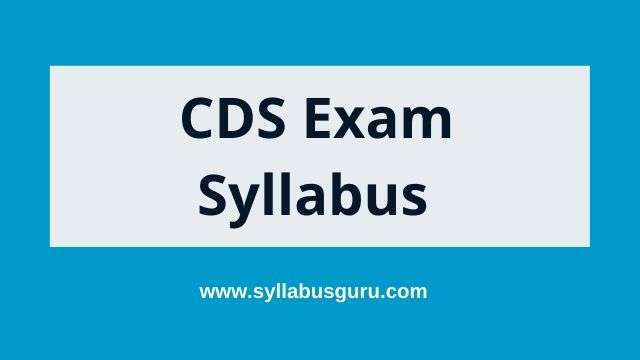 Here, in this article we will provide you the detailed CDS syllabus for the aspirants who are planning to prepare for the cds exam.

Before starting the preparations it is very important to to understand the syllabus and exam pattern of the particular exam with eligibility. Below we have provided the detailed CDS syllabus, exam pattern, best books recommendations and FAQ to answer any doubt or query.

The syllabus of the written examinations consists of the following subjects: English, General Knowledge and Elementary Mathematics and the detailed topic of each subject are mentioned below according to the official notification.

The scheme of the combined defence service exams are:

Some of the important points regarding written examinations of cds are as follows:

For Admission to Officers’ Training Academy

The question paper will be designed to test the candidates’ understanding of English and workmanlike use of words.

General Knowledge including knowledge of current events and of such matters of everyday observation and experience in their scientific aspects as may be expected of an educated person who has not made a special study of any scientific subject. The paper will also include questions on History of India and Geography of a nature which candidate should be able to answer without special study.

Lines and angles, Plane and plane figures, Theorems on (i) Properties of angles at a point, (ii) Parallel lines, (iii) Sides and angles of a triangle, (iv) Congruency of triangles, (v) Similar triangles, (vi) Concurrence of medians and altitudes, (vii) Properties of angles, sides and diagonals of a parallelogram, rectangle and square, (viii) Circles and its properties including tangents and normals, (ix) Loci.

The SSB procedure consists of two stage Selection processes – stage I and stage II. Only those candidates who qualify the stage I are permitted to appear for the stage II. The details are:-

(a) Stage I include Officer Intelligence Rating (OIR) tests are Picture Perception* Description Test (PP&DT). The candidates will be shortlisted based on combination of performance in OIR Test and PP&DT.

(b) Stage II include Interview, Group Testing Officer Tasks, Psychology Tests and the Conference. These tests are conducted over 4 days. For more detail candidates can visit the official website www.joinindianarmy.nic.in.

The personality of a candidate is assessed by three different assessors viz.

The best book for the cds syllabus exams are as follows:

How many times CDS exams are conducted in  a year?
It is conducted by UPSC two times in a year.

What are the stages of CDS examinations?
It include: