Fire and ice summary: Here we are going to explain all the poetic devices also fire and ice that is written by Robert frost who was a very famous American poet and he’s the only poet to receive 4 Pulitzer Prizes for poetry. It is a short poem Which deals with two possibilities of destruction of the world. 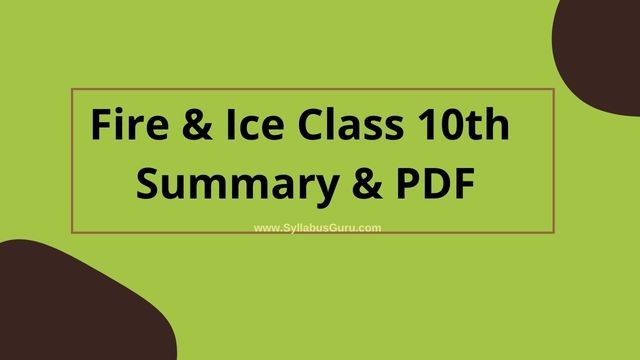 so in this poem the poem is talking about how the world will come what will be the cost of its destruction.

Poet says that there are some people who believe that the world will come to an end, excessive dry skin temperature become so hot that it won’t be possible to survive on this planet.

On the other hand, there are some people who that the boy will come to an end to excessive fall in temperature will become so cold, it will be covered with dead eyes that nobody would give it to survive and that’s how it will come here end. So, these are two schools of thought and then the poet tells his opinions it is a symbolic poem here fire is a symbol of excessive desire passion and ice is a symbol of hatred.

So, in a symbolic way the poem is saying either the world will complete excessive desire uncontrolled passions of people and if not so then the world will come to hatred above what are the state of desire the poet expresses this opinion.

So, he sends from what I know of desire I hold with those who favor fire, so he says that yes out of these two options I that excessive passion, excessive desire, it’s a stronger emotion, it’s a very dangerous emotion and I think it will be the cause of destruction of the world right.

If it had to perish twice the poet is saying that but if the earth had to perish twice, I think I know enough of hate to say that for destruction ice is also great and good and would suffice means sufficient, so although the poet favors fire but he doesn’t give off the second option.

He says that yes, I delete that excess, if desire is a very negative emotion so they come to pause of the world discussion but victor is equally powerful if the earth had to be destroyed twice.

If it had to die twice then the trip is equally powerful to be the cause of its destruction. So, in this poem the poet wants to say that if we hit negative emotions like anger, lust, jealousy, except in deference so all these are negative emotions. They move toward destruction, so we have to learn to control this is all about it.

when we read the poem, it creates a picture in the mind we see the earth is engulfed in fire or it is covered with deadly eyes right so such kind of pictures are created in the readers mind so it is called imagery that’s all about it I hope you must have understood the poem.

About summary of poem fire and ice