If i were you class 9 pdf: let us see the summary of the drama if I wear you by Douglas James. Gerrard is on the phone he hangs up and starts packing a bag a man quietly enters from behind and moves towards chariot. The intruder accidentally hits the table causing Gerrard to turn, Gerrard greets the intruder pleasantly the intruder however threatens Gerrard he also wants to know a few things about Gerrard. 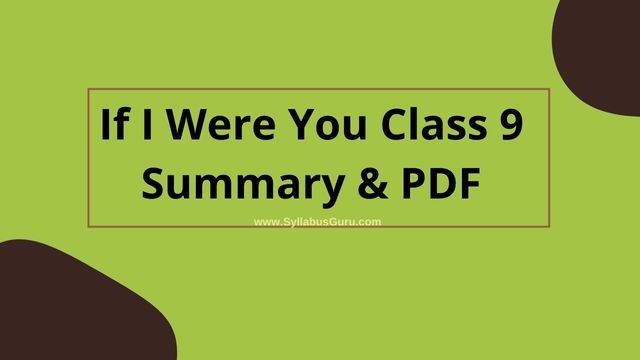 Gerrard replies that he is happy to answer the intruder’s questions, but he also asks if he can be more comfortable. The intruder tells Gerrard to sit on the chair, he wants to have a nice talk about Gerrard’s life. Gerrard is ecstatic he has finally found someone willing to listen to his life stories, he launches into a story of gypsies stealing him as a child the intruder interrupts Gerrard and tells him to just answer his questions, he then asks Gerrard for his full name and whether he owns a car or not.

If i were you class 9 pdf

He then wants to know if Gerrard receives frequent visitors Gerrard answers that other than a few delivery people he very rarely receives visitors.

The intruder again catches Gerrard in the lie and then reveals that he has been watching Gerrard for quite some time in the past. Gerrard comments that the introduction knows quite a bit about him in return Gerrard asked intruder about himself.

He tells the story of his last strawberry and how he is on the run from the police you know reveals that he plans to kill Gerrald and after killing him he can assume Gerrard’s identity.

If i were u class 9 summary

Gerrard tells him that it is not a good idea to take over his identity, the intruder counters him by saying that Gerrard’s lives full of isolation will suit the intruder perfectly after all in the village he is somewhat of a mystery at this point.

Gerrard reveals that his name is not Gerrard and he is as guilty as the intruder he was involved in a gun fight with the police and one of his men was caught with compromising materials. The police knew where he was and where on their way to the cottage in fact he was about to run when the intruder entered his cottage.

The intruder says that he does not believe Gerrard’s story, Gerrard tells him to check it out for himself.

Gerrard answers the telephone he then calls and asks the caller to find out the sergeant and to send him to the cottage. So, through his presence of mind Gerrard manages to save himself from the intruder.

About if i were u class 9 pdf

if i were you pdf
Beehive class 9 PDF