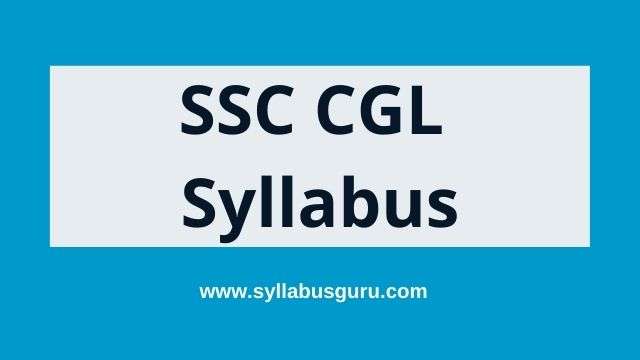 SSC cgl syllabus 2020: Staff Selection Commission (SSC) CGL is one of the most popular government jobs among the aspirants who are preparing for the ssc or other competitive examinations.

For the candidates who want to prepare for the ssc cgl exams and need full details about the ssc cgl exam, then here we have covered the detailed syllabus of ssc cgl exam for all those aspirants along with some best book recommendations for the examinations.

Questions in this component will be aimed at testing the candidates‟ general awareness of the environment around him and it’s application to society. Questions will also be designed to test knowledge of current events and of such matters of everyday observations and experience in their scientific aspect as may be expected of any educated person. The test will also include questions relating to India and its neighbouring countries especially pertaining History, Culture, Geography, Economic Scene, General Policy & Scientific Research.

Candidates‟ ability to understand correct English, his/ her basic comprehension and writing ability, etc. would be tested.The questions in Parts A, B, & D will be of a level commensurate with the essential qualification viz. Graduation and questions in Part-C will be of 10th standard level.

Questions in this component will be designed to test the candidate‟s understanding and knowledge of English Language and will be based on spot the error, fill in the blanks, synonyms, antonyms, spelling/ detecting misspelled words, idioms & phrases, one word substitution, improvement of sentences, active/ passive voice of verbs, conversion into direct/ indirect narration, shuffling of sentence parts, shuffling of sentences in a passage, cloze passage & comprehension passage.

Part A: Finance and Accounts-(80 marks):
Fundamental principles and basic concept of Accounting:

Part B: Economics and Governance-(120 marks):

Basic Concept of Economics and introduction to Micro

Economics: Definition, scope and nature of Economics, Methods of economic study and Central problems of an economy and Production possibilities curve.

Theory of Production and cost: Meaning and Factors of production; Laws of production- Law of variable proportions and Laws of returns to scale.

Role of Information Technology in Governance.

Questions in Paper-I will be of Matriculation Level, Paper-II of 10+2
Level and in Paper-III and Paper-IV of Graduation Level