SSC chsl syllabus 2022: The staff selection commission SSC issued various vacancies notification every year for the various ssc posts. For the aspirants, who are preparing for government job examinations, SSC is a big opportunity to get a government job. There are various posts available according to educational qualifications, eligibility and various other factors. 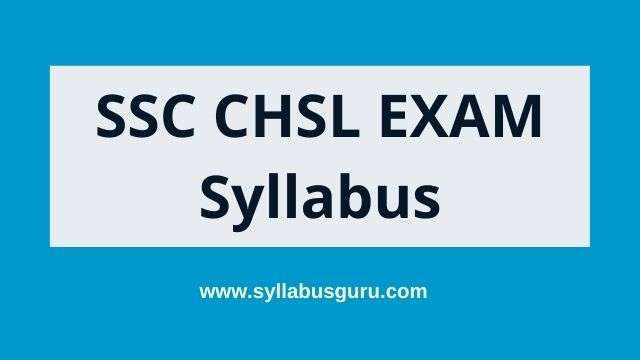 As we all know before applying for any exam, it is important to understand the syllabus of the exam, exam pattern. In this article we have covered the detailed syllabus of ssc chsl syllabus for stage 1 and stage 2 exams and typing test.

After successfully qualifying stage1 and stage 2 exam, one has to appear in the typing skill test and it will be of qualifying nature. Candidates who are preparing for the ssc chsl exam, one should have to focus on every stage of exam to get the final selection.

Nowadays, competition levels in government jobs exams are very high and it is not easy to crack the exam without systematic planning and understand the exam pattern and nature. Below we have covered the detailed syllabus of ssc chsl syllabus to deeply understand the exam syllabus. The syllabus is according to the official notification issued by ssc for ssc chsl exam.

There are mainly three stages of ssc chsl examination which are as follows:

Some of the important points regarding stage 1 of ssc chsl examinations are:

The best book for the ssc chsl exams are as follows:

These are some of the recommended books for the preparation of the ssc chsl exam. Candidates can refer to these books to boost their preparations.

Payscale for the various level job according to ssc official notifications are as follows:

What is the mode of SSC CHSL tier I exam?

SSC CHSL tier I exam will be conducted only in online mode.

How many questions are asked in the ssc chsl tier I exam?

In the ssc chsl tier I exam 100 objective type questions are asked.

Is there any negative marking in SSC CHSL tier I exam?

Yes, there are 0.50 marks negative marking for each wrong answer.

How many marks are awarded for every right answer?

There are 2 marks that will be rewarded for every correct answer.

What are the stages of examinations?

There are 3 stages of exams which are as follows:

What is the mode of SSC CHSL tier II exam?

It will be descriptive in nature and it will be offline.