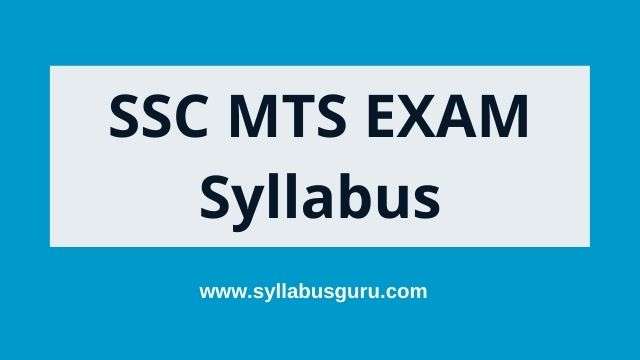 SSC mts syllabus 2021: The staff selection commission (SSC) issues various vacancies of multi tasking staff (MTS). For the aspirants, who are preparing for ssc exams, ssc mts is also the one of the demanded posts among the students and numbers of applicants apply for the particular post. So, here in this article we will share with you the detailed syllabus of ssc mts, exam pattern of ssc mts, stages of ssc mts exam, best book for the ssc mts exam preparations and others.

If you are the one who is willing to know all about the ssc mts exam read the whole article thoroughly to get the full syllabus of ssc mts syllabus and all other related information regarding ssc mts exam.

The ssc mts syllabus for paper 1 is divided into four sections namely General Awareness, Numerical Aptitude, General Intelligence  & Reasoning and General English. Aspirants have to clear stage first paper to appear in paper II that are descriptive in nature. Paper II will be descriptive and it comprise a writing of a short essay or letter and it will be qualifying in nature.

After clearing paper I and paper II candidates have to clear document verifications then final selections.

Below we have covered the detailed syllabus and exam pattern of the ssc mts exam.

There are mainly three stages of ssc chsl examination which are as follows:

Candidates’ understanding of the Basics of English Language, its vocabulary, grammar, sentence structure, synonyms, antonyms and its correct usage, etc. and writing ability would be tested.

This numerical aptitude paper will include questions on problems relating to Number Systems, Computation of Whole Numbers, Decimals and Fractions and relationship between Numbers, Fundamental arithmetical operations, Percentages, Ratio and Proportion, Averages, Interest, Profit and Loss, Discount, use of Tables and Graphs, Mensuration, Time and Distance, Ratio and Time, Time and Work, etc.

General awareness questions will be designed to check the ability of the candidate’s general awareness of the environment around him and its application to society. The test will also include questions relating to India and its neighbouring countries especially pertaining to Sports, History, Culture, Geography, Economic scene, General Polity including Indian Constitution, and Scientific Research etc.

After qualifying paper I and paper II, candidates have to appear for document verification process and it required original documents which are as follows:

According to the official notification of ssc mts exam photo id proof can be:

For more detail candidates can refer to the official notification of ssc mts exam.

After completing and successfully qualifying all the stages, candidates will get the final selection for the post of ssc mts.

There are various book to prepare for the ssc exams, here we will suggest some of the best books for the preparations:

What is the syllabus of SSC MTS tier I exam?

What is the exam mode of the SSC MTS paper I exam?

The ssc mts exam will be in online CBT (Computer based test) mode.

Is there any negative marking scheme in the SSC MTS paper I exam?

Yes, there will be 0.25 marks negative marking for each wrong answer.

What are the stages of the ssc mts exam?

The paper is divided in paper I and II which are as follows:

What is the exam mode of the SSC MTS paper II exam?

SSC MTS paper II will be descriptive in nature and it will be offline.

What is the syllabus for the SSC MTS paper II exam?

A short essay or letter is to be written in English or hindi or language included in the VIII Schedule of the Constitution.

SSC is a very popular government job among the aspirants and it releases various vacancies every year for the various posts. Students who are preparing for government job examinations, ssc mts can also be the one of them and above we have covered detailed ssc mts syllabus for the aspirant to understand the ssc mts syllabus and exam pattern and start their preparation accordingly.