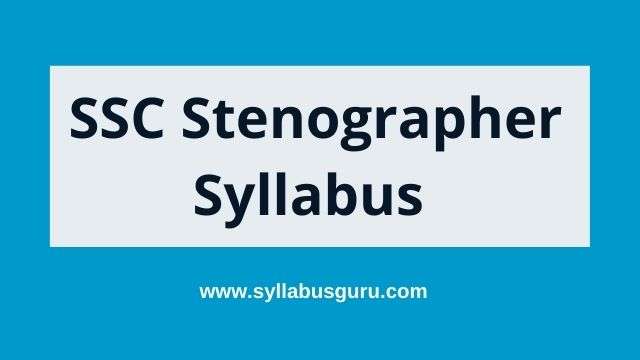 SSC stenographer syllabus: The staff selection commission (SSC) will hold an recruitment process of ssc stenographer grade C and D post. Candidates who have desired skill in stenography will be eligible to apply for the stenography post. SSC conducts a computer based examination for the various stenographer posts.

Computer based examination (CBT) syllabus cover the General Intelligence & Reasoning, General Awareness, and General English section for CBT test and the time duration allotted for computer based examination are 2 Hours (2 hours and 40 minutes for the candidates who are allowed use of scribe). After successfully qualifying the CBT test candidates will be eligible to appear in the skill test in stenography.

The stages of ssc gd constable examination are as follows:

In SSC steno CBT questions will be divided into three subjects which are as follows:

It would include questions of both verbal and non- verbal type.

General Awareness: It include general awareness of the environment around him and its application to society. The test will also include questions relating to India and its Neighboring countries especially relating to Sports, History, Culture, Geography, Economic scene, General Polity including Indian Constitution, and Scientific Research etc.

For VH candidates of 40% and above visual disability /cerebral palsy affected candidates and opting for scribe there will be no component of Maps/Graphs/Diagrams/Statistical Data in the General Intelligence & Reasoning / General Awareness Paper.

In addition to the testing of candidates’ understanding of the English Language, its vocabulary, grammar, sentence structure, synonyms, antonyms and its correct usage, etc. his/her writing ability, would also be tested.

The best book recommendation for the ssc steno syllabus exams are as follows:

Here, we have recommended some of the books for the preparation of the ssc steno exam. Candidates can refer to these books to speed up their preparations.

What is the way of the SSC Steno exam?
SSC stenographer exam will be conducted only in CBT online mode.

What is the exam duration of the SSC steno exam?
The complete time allotted for CBT exam is 2 Hours (2 hours and 40 minutes for the candidates who are allowed use of scribe).

What are the stages of examinations?

The stages of exams which are as follows: