The beggar class 9 pdf download: The summary of lesson 10 from the book moments of last night the beggar by Anton Chekhov. Anton Chekhov was a Russian writer and the story is based on the theme of transformation of an alcoholic through kindness, compassion and selflessness. Some people get into bad habits and they find it difficult to quit on their own, kindness and compassion from fellow humans can reform such people. So, in this way we’ll see how a beggar gets reformed as he received compassion and kindness from a person. 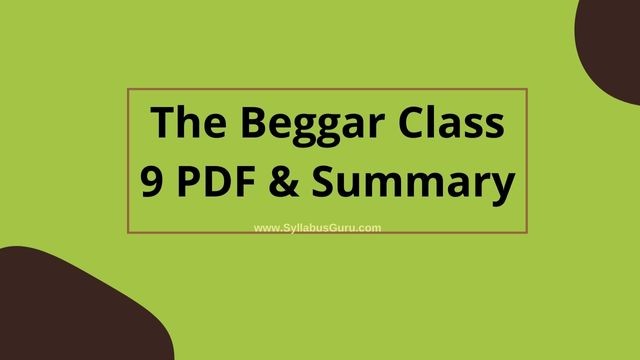 One day when he’s going to his office, he comes across a beggar the better approaches him and asks for help of faith, he says that for eight years he was a village schoolmaster his colleagues from spies against and he lost his job now he’s jobless he doesn’t have any money.

Although he has got a job in a different city but he doesn’t have any money to get there so, he asks for help, he asks for money he tells that I have to purchase a bus ticket but something he recognizes the beggar at once he remembers that he had seen the same beggar insubordinate sit last week and at that time the beggar was telling a different story.

The Beggar doesn’t accept his lies initially he says that no you’re mistaken you must have seen some other beggar but as surrogate threatens to call the police the beggar accepts.

He accepts that yes, I was telling a lie and I have to tell lies every day to earn money because if I tell them the true, the truth that nobody is going to take any pity on and nobody is going to help me. He tells that he was a singer in a chorus and he got fired he lost his job due to his bad habits due to his alcoholism so he tells him to work hard to live to earn a living.

So he is a kind man he takes pity on the beggar and he offers him a job he tells him to come to his house and cut wood for him he gives his address to the beggar the Beggar is a lazy person of course he has no intention to work hard and earn a living all he wants to do is you need to beg.

But since he thought in his own words, he has to accept his offer, so he accepts the offer reluctantly so on the set day the beggar goes to Sergei’s house Sergei house to drop the vote.

Sergei’s is pleased to see the beggar because he was doubtful whether the beggar would come or not, so when he sees the beggar, he is pleased he calls his school he has a cook she’s a fat little lady her name is Olga Sergey calls her and he asked her to take the beggar to the woodshed.

Olga is very rude to the beggar like she is you know she is very rude to him and she scolds him she represents him right and with her gesture with her gestures with her body language. She shows that this figure is good for nothing and Sergei should not have brought him to this house but she has to follow orders, so she takes the beggar to the good ship and hands him over the axe.

The beggar is too weak to work he’s not even able to hold the axe properly let alone cutting the wood he makes several failed attempts to cut the wood but he is so weak, he consumes alcohol so he has become so weak his health has become so bad that he’s not able to do any work Sergei seen everything standing on his window.

He’s looking outside and he’s seeing everything he sees that the beggar is not even able to hold, so he thinks that it was a mistake he thinks that he shouldn’t have called the beggar the poor creature is not even able to work, so he goes away after some time although goes to Sergei and she tells him she informs him that the wood has been chopped Sergei is pleased he’s so happy.

Finally the beggar is doing something he is trying to change his way of life he’s working hard, so he is impressed and he pays the beggar.

Sergey is happy with his performance, so he tells the beggar to come to his house on the first day of each month to chop wood for him, so the beggar returns on the set day and again both is dropped and he gets his money.

That day onwards he often comes to his house to do odd jobs like hitting the dust, out of the rugs and shoveling the snow, arranging wood in the woodshed.

So, all these kinds of works are done by the beggar and in the more he gets time passes by and Sergei moves to another house, so Sergey is shifting to another house and he calls the beggar to help with the packing at haulingfurniture.

The beggar comes but he’s very weak he’s not doing anything, he is not able to pick up the heavy stuff and load in the truck, so he’s just moving around without doing much work other people who are hired by serving to you would do all these works of shifting and falling off a nature and loading.

So they make they laugh at the begger they make fun of him and they say that OK look at this look at him he’s not doing anything he’s just passing time moving here and there, so they tease him but the beggar he doesn’t seek anything.

He’s very quiet on that day anyways after the work is done Sergie calls the Beggar and he gives him money and he is very happy with him and he’s so happy with himself also he so satisfied that he has transformed a man right.

He has helped a beggar to change his way of life right so he’s very happy and that day he asks this name he also shakes hands with the beggar the beggar tells his name his name is Lushkoff, so Sergei is very happy with him and while departing he gifts off the beggar a letter addressed to one of his friends and he tells the beggar to go and meet this man and he helps him getting a drop last.

So he is very happy sergei very happy as he thinks he has brought a beggar on the right path after that day they never meet the beggar, he never returns Sergey moves to another house.

So the beggar joins the new job he starts working as a notary like you can a clerical job, they never meet after that day but after two years Sergei goes to a theater and when he was at the ticket window purchasing tickets for himself he sees a man who looks just like he’s dressed properly he’s wearing a coat and he looks educated right, so he looks at that person and he recognizes but yes this man is nobody but Lushkoff.

I’m very thankful that you have helped me and if you would not have taken pity on me then perhaps I would be watching as a beggar somewhere and I would be still begging on the streets.

But the true credit to change me goes to Olga Sergei, he is confused he’s like what, did she do then Lushkoff tells him that although Olga used to get mad at him.

She would scold him all the time she would be good with him she would reprimand him but she was very kind to him while doing, so she would often cry right and she showed a lot of kindness towards him and he never dropped the woods.

It was Olga who did it for him when Olga understood that OK the beggar is too weak to chop the woods, she did it herself and then she went to Sergie and told him that they would was dropped by the beggar.

About moments class 9 pdf the beggar