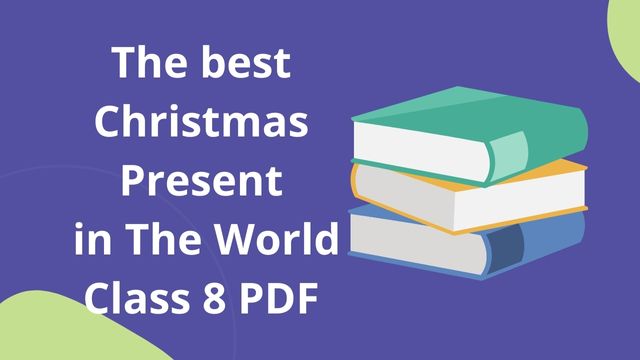 The best christmas present in the world class 8 summary: No one wants a war nobody likes to fight in a war if two nations can sit together to find a solution instead of fighting with each other that could save a lot of lives and that’s exactly the thought that has been reflected in this story, the best Christmas present in the world but before I tell you more about it let me introduce you to the author Sir Michael morpurgo is an english book author poet playwright and lyricist.

He is best known for writing children’s novels such as war horse his work is noted for its magical storytelling for frequent themes such as the victory or survival of an outsider for characters relationships with nature and for vivid settings such as the World War one Morpurgo became the third children’s laureate from 2003 to 2005. The best Christmas present in the world this story is about a beautiful incident that took place during the First World War. The author went to a junk shop in Bridgeport UK and bought a roll-top desk.

the best christmas present in the world class 8 pdf

The desk was in bad condition, but the author thought he would be able to repair it on Christmas Eve. He began working on it by removing the roll-top and pulling out the drawers.  He found a secret drawer with a small black tin box hidden inside the box had a note taped to it. The note instructed the finder to bury it with the owner of the desk, when the time came when the author opened the box, he found an envelope addressed to Mrs. Jim Mac person of 12th copper beeches Brid port Dorsett.

The enclosed letter was stated December 26th, 1940, the author read the letter it was written by Jim Mac person a captain of the English army to his wife Connie.   In the letter Jim narrated a beautiful incident that took place on the battlefield on Christmas Day in 1914 the English and the German armies were in them respective trenches.

the best christmas present in the world class 8 summary

Suddenly Jim saw someone from the German side waving a white flag he watched as a few German soldiers approached to wish the English soldiers a happy Christmas. The English soldiers replied in kind suddenly several unarmed German soldiers began walking crossing the no-man’s land or neutral territory.  Carrying the German alcohol schnapps and sausages soldiers from both armies began quake hands and wishing each other a German officer named Han’s wolf shake hands with Jim McPherson.

They introduced themselves shared rum and cake and talked about their families and books then the soldiers played football while their officers cheered and clapped. When the food and drink were over the two sides wished each other well and hoped the war would end soon.   Then they returned to their trenches McPherson ended the letter confident that the war would end soon, and he and Carney would be reunited after reading the letter.

When the author met Mrs. Mac person, he called her Connie and gave her the letter her eyes lit up, when she saw the letter in her confused state, she mistook the author for Jim and thought Jim had kept his promise and returned on Christmas Day.   She said she had received the best Christmas present in the world.

About class 8 the best christmas present in the world

the best christmas present in the world class 8 pdf

Disclaimer: SyllabusGuru does not own this book pdf, neither created nor scanned. We just provide the link already available on the internet and in google drive for educational purposes only. If any way it violates the law or has any issues then kindly mail us [email protected] to request removal of the link. We do not support piracy.