The lost child summary pdf: The lost child goes to fair with his parents, he’s happy and excited but wants the sweets and toys displayed there, but his parents don’t buy them.  Why then does he refuse when someone else offers them to him, they learn about the change in the behavior of the child before and after getting lost. 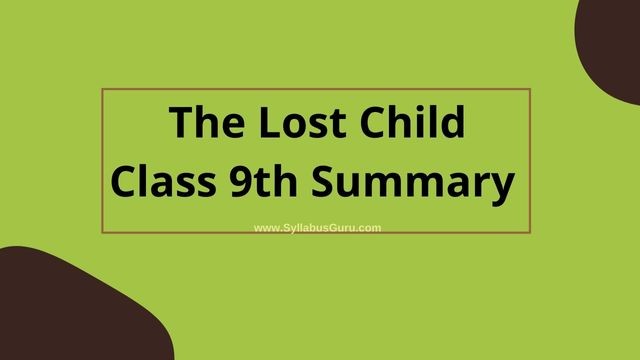 The story is based on the theme of close bond that children share with their parents. The lost child is making so many demands, he wants so many things but when he spoke the when he loses his parents. He forgets all about his demands and desires only wants is this parent, everything loses importance he only wants to be with his parents.

That’s big in the summer this is a day of spring festival, all the villagers are going to fair the character of this story is also going to the fair with its parents he’s happy and excited.

At the entrance he sees the sweet seller and he started to demands, the depart halfhearted in the mini more voice why because he knows instead of buying the burfi for him his parents will call him.

After walking a little he sees the flower civil and his fascinated by the Gulmohar garland again he makes a faint demand for the flowers but he knows his parents will not buy him because then their opinion flowers are cheap and just a waste of money.

After moving on a little he sees a balloon seller and is thrilled to see the bright colored balloons, he wants to have them again he makes a faint demand but he also knows that his parents will not buy because they think that he has grown up now and he still old to play with the adults.

Never mind further he sees the snake travel a snake charmer who’s playing his flute grabs his potential he wants to go and listen to his music and he wants to see the snake dancing to the tune’s office flute, he moves towards him a little but then he withdraws his steps suddenly, he stops because he knows that his parents will not like it.

They have forbidden him to hear such rough music they think that such kind of music is not suitable for the children of his age, so he stops.

After that his first demand he’s chopped by a roundabout in full swing he sees that all the children are enjoying their rights many children are enjoying their rights on the roundabout and he also wants to go to enjoy,  so this time failing to resist his desire he makes a bold request to his parents to let him go on the roundabout, he says that see everyone is going and I also want to write on the roundabout but when he doesn’t hear any reply he talks to look for his parents he turns back to look at his parents they are not anywhere to be seen near him he can’t see them anywhere the child gets scared and he starts crying he loves her and there and cannot find them.

So he gets all confused he starts crying loudly and he starts running here and there to find his parents, he rushes to a shrine it’s a holy place of worship where people go and offer their prayers and everything.

So he rushes to a strike which is crowded with people all the people that are trying to surpass each other, they’re pushing each other he tries to make his way through the crowd because he thinks maybe his parents are also the other shrine. But he’s not down since the people are pushing each other, so the child is knocked down and he falls he starts crying loudly a man hears his cries and rescues him.

But the child doesn’t stop he keeps crying and he keeps saying one thing I want my father I want my mother, after that the man takes it to the sweet stall again the child doesn’t stop, he keeps saying the same thing and one by one the man takes him to all the things which he wanted earlier he takes him to the balloon seller and offers him some balloons he refuses.

He then takes him to the flower seller again the child doesn’t want any gulmohur garland which he wanted earlier after that he takes him to the sweet seller the trial is inconsolable, he doesn’t stop crying, he keeps repeating one sentence I want my mother I want my father.

So that was the summary of this lesson the lost child.

About the lost child class 9 summary in english