The voice of the rain summary pdf: In this article we are going to cover the poem the voice of the rain along from the book hornbill of class 11 and the poet is walt whitman. Walt Whitman was an American poet and journalist he is among the most influential american writers of all time, he is also known as the father of free verse free words means when there is absence of rhyme scheme, when there is no rhyme scheme it is called free words. 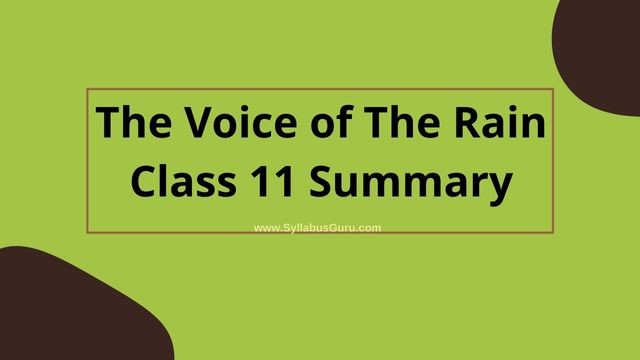 the voice of the rain summary pdf

The poet is asking the rain who are you which strange to tell gave me an answer as here translated and the answer that the rain gave is here I am the poem of earth said the voice of the rain.

When the poet asked the rain who are you the rain says i am the poem of earth now why the rain is calling herself a poem, a poem is characterized by music and rhythm, it has power to soothe to heal and rejuvenate and all these qualities are also possessed by rain also which is why rain is compared with a poem.

So the rain says i am the poem of earth eternal i rise impalpable are of the land and the bottomless, here the rain is telling about its origin how it originates how it comes into existence.

Once vaguely formed altogether changed and yet the same i rise towards the sky whence means where vaguely means not clearly.

the rain says I rise I move towards the sky where i again change my shape it’s not visible but yes i change my form, i take the shape of clouds from vapors now i change my shape to clouds, all together changed and yet the same although my shape my form is changed completely but from inside i am still the same.

the voice of rain summary class 11

I descend to leave the droughts at means dust layers of the globe i again come down to earth i fall back to earth and wash away the droughts.

All the atoms small particles tiny particles and I wash away all the dust layers of the globe and all that in them without me was seeds only latent unborn the rain says without me all the plants and trees they we’re nothing more than seeds hidden inside the earth.

They were unborn now the plants and trees which are sprouting after the rainfall before i came they were nothing but the seeds hidden inside the earth and forever by day and night i give back life to my own origin who is reigns origin.

So, in a way rain is giving back life to its own origin it originated from the earth and when it falls down back on earth it gives back life to everything and make pure and beautify it.

I purify everything and i bake and I make it more beautiful, song issuing from its birthplace after fulfillment wandering reckoned or duly with love returns reckoned or unwracked.

Summary of voice of the rain

It travels across and after serving its purpose it again comes back to the artist it comes back to the singer and it brings a lot of love, similarly the rain says the poet says that the rain is just like a song it originates from its birthplace from the land and the sea and after fulfilling its purpose, after wandering here and there after going here and there, whether people care about its deeds, whether people acknowledge what the rain has done for them or not it serves its purpose and again it reunites with its origin.

It comes back with a lot of love and it reunites with its origin that is earth the land so that’s all about it.

About the voice of rain summary class 11

the voice of the rain pdf