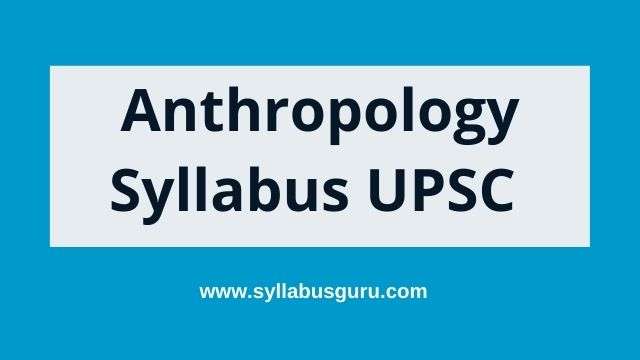 For the right choice of subject it is important to know the exam pattern and structure before starting their preparation strategy.

Along with the anthropology syllabus we have also covered the various optional and other subjects syllabus of upsc, so that candidates can also consider all those relevant subjects.

1.1 Meaning, scope and development of Anthropology.

1.3 Main branches of Anthropology, their scope and relevance:

1.4 Human Evolution and emergence of Man :

(a) Biological and Cultural factors in human evolution.

(b) Theories of Organic Evolution (Pre-Darwinian, Darwinian and Post-Darwinian).

1.6 Phylogenetic status, characteristics and geographical distribution of the following :

2.1 The Nature of Culture : The concept and Characteristics of culture and civilization; Ethnocentrism vis-a-vis cultural Relativism.

2.4 Family : Definition and universality; Family, household and domestic groups; functions of family; Types of family (from the perspectives of structure, blood relation, marriage, residence and succession); Impact of urbanization, industrialization and feminist movements on family.

Nature, origin and characteristics of language; verbal and non-verbal communication; social context of language use.

(a) Fieldwork tradition in anthropology

(b) Distinction between technique, method and methodology

(a) Numerical and structural aberrations (disorders).

intersex and other syndromic disorders.

—Ageing and senescence. Theories and observations

11.1 Relevance of menarche, menopause and other bioevents to fertility. Fertility patterns and differentials.

Anthropology in designing of defence and other equipments, Forensic Anthropology, Methods and principles of personal identification and reconstruction, Applied human genetics—Paternity diagnosis, genetic counselling and eugenics, DNA technology in diseases and medicine, serogenetics and cytogenetics in reproductive biology

1.3. Ethno-archaeology in India: The concept of ethno-archaeology; Survivals and Parallels among the hunting, foraging, fishing, pastoral and peasant communities including arts and crafts producing communities.

3.1 The structure and nature of the traditional Indian social system—Varnashram, Purushartha, Karma, Rina and Rebirth.

3.4. Impact of Buddhism, Jainism, Islam and Christianity of Indian society.

5.1 Indian Village—Significance of village study in India; Indian village as a social system; Traditional and changing patterns of settlement and inter-caste relations; Agrarian relations in Indian villages; Impact of globalization on Indian villages.

5.2 Linguistic and religious minorities and their social, political and economic status.

6.1 Tribal situation in India—Bio-genetic variability, linguistic and socio-economic characteristics of the tribal populations and their distribution.

6.3 Developmental projects and their impact on tribal displacement and problems of rehabilitation. Development of forest policy and tribals. Impact of urbanisation and industrialization on tribal populations.

7.3 The concept of ethnicity; Ethnic conflicts and political developments; Unrest among tribal communities; Regionalism and demand for autonomy; Pseudo-tribalism. Social change among the tribes during colonial and post-Independent India.

8.1 Impact of Hinduism, Buddhism, Christianity, Islam and other religions on tribal societies.

8.2 Tribe and nation state—a comparative study of tribal communities in India and other countries.

9.2 Role of anthropology in tribal and rural development.

9.3 Contributions of anthropology to the understanding of regionalism, communalism and ethnic and political movements.